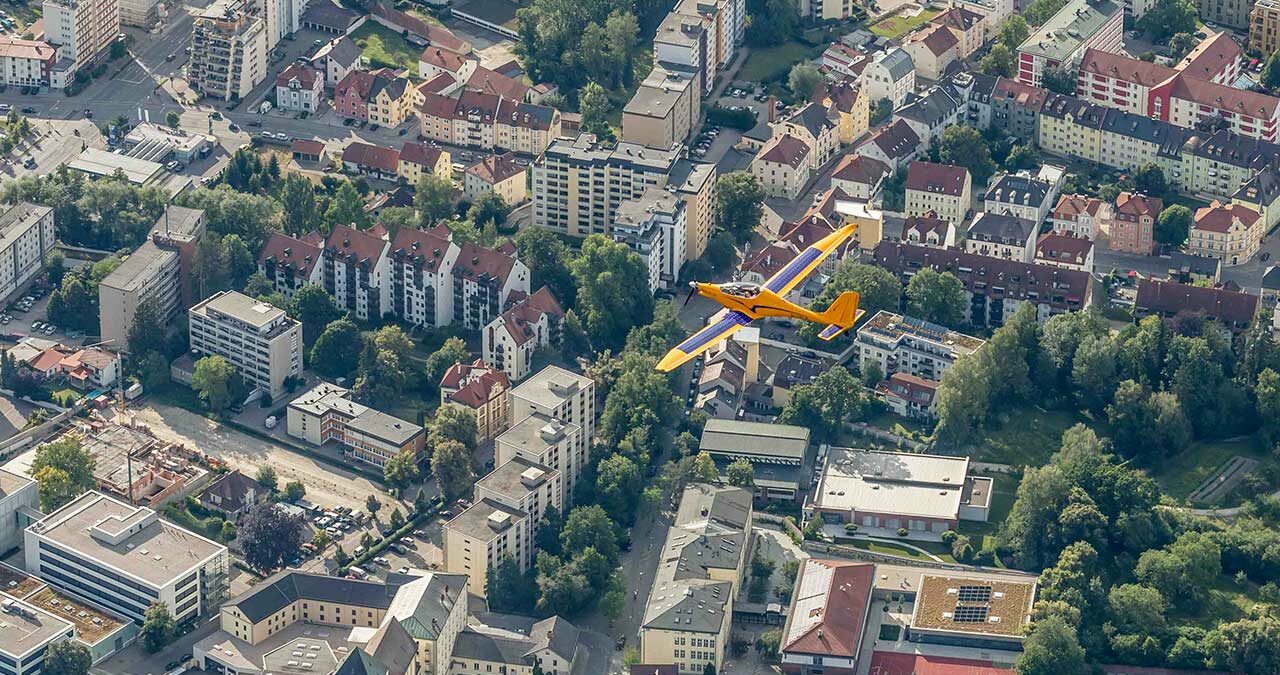 Elektra Solar and 3D RealityMaps have developed a novel method for photogrammetric 3D modelling based on a solar-powered ultralight aircraft.

When the weather was still summery in August, something happened above the historic old town of Landsberg am Lech that could hardly be noticed in the alleys of the city – at least as far as a hearing was concerned. At an altitude of only 300 meters, an aircraft flew over the town in a regular pattern – but so quietly that one is not used to hearing a plane at this altitude. Meanwhile, only insiders knew that the aircraft had several technological innovations: First, the aircraft uses solar power as an energy source and therefore does not make the usual engine noise with its electrically driven propeller. On the other hand, it contains a newly developed sensor technology for photogrammetry, with which the city of Landsberg am Lech wants to obtain several data products at once: high-resolution aerial photographs, an equally detailed 3D city model and, at the same time, a 3D analysis of the thermal radiation of individual buildings. This is an innovative city project in more ways than one.

The companies behind the innovative solution are Elektra Solar GmbH, a spin-off of the German Aerospace Center (DLR), and 3D RealityMaps GmbH. Elektra Solar has developed the ultralight aircraft, which is equipped with solar cells and has unique advantages for populated areas. “Besides, it does not require a special ascent permit, as is the case with drones, for example, and can therefore fly over populated areas and critical infrastructure,” says Dr Sven Schmid, head of airborne geospatial data collection at the company, which is also based in Landsberg am Lech.

The aircraft has a wingspan of 13 meters and a high glide ratio of more than 30, meaning it has an excellent drag-to-lift ratio, reducing noise emissions. Likewise, Elektra Solar has developed a unique autopilot system for high-precision tracking. A predefined flight path can be followed and repeated as often as desired later on.

The flight control system is also used in the Elektra Two Solar aircraft, a solar-powered aircraft about twice its size that has been optimized for flights into the stratosphere (up to 20 km altitude) and can carry payloads of up to 100 kg.

The ultralight aircraft flies at an altitude of only 1000 feet above the ground (about 300m) for data collection, creating better optical data acquisition and sensor technology conditions. The Elektra Solar produces flight noise of 50 decibels, a factor of 4 quieter than comparable powered aircraft, so it is barely audible, making it easier to approve flights.

Therefore, 3D RealityMaps and Elektra Solar have developed a sensor system based on commercially available camera systems. “We thus achieve a unique quality and resolution of up to two centimetres,” says Professor Florian Siegert, CEO of 3D RealityMaps. Other advantages include low vibration and slower flight speed, he said. The system consists of a variable 5-fold oblique aerial camera system and is optimized for a flight altitude of only 300 meters above the ground. “This reduces the atmospheric influence and at the same time increases the data quality quite significantly at a lower cost,” Siegert describes. At the same time, a multispectral camera and a thermal camera are carried along during the flight. “This allows various issues to be addressed with a single aerial survey,” says Siegert.

Furthermore, 3D RealityMaps has also developed unique algorithms based on object recognition and machine learning to extract information from the 3D dataset. The company also draws on its sister company RSS GmbH, whose expertise lies in the analysis of earth observation data. “We can classify the aerial images and the 3D dataset according to specific criteria,” describes Siegert. He says that trees or green areas and green roofs or the volume of vegetation can be determined. Other applications include the automated recording of building stock, roof shapes and roof superstructures, and the recognition of street inventory.

The evaluations also ensure that sensor data can be processed in combination, allowing thermography data to be transferred directly to the 3D city model. “For example, heat leaks on buildings can be located, heat distribution in the city can be analyzed, or the health of vegetation can be examined,” Siegert reports.

Currently, Elektra Solar and 3D RealityMaps are working together with the city of Landsberg am Lech to implement the “Thermcity3D” research project, which is being funded by the German Federal Ministry of Transport and Digital Infrastructure as part of the Modernity Fund (“mFUND”) funding guidelines. The digital 3D twin of the city is to be wholly overlaid with thermal images. In this way, cities and municipalities will be able to plan targeted measures for sustainable urban development and improvement of the climate balance, in addition to the surveying obligations. Elektra Solar and 3D RealityMaps have developed a novel method for photogrammetric 3D modelling based on a solar-powered ultralight aircraft. The purely solar-powered aircraft from Elektra Solar has hardly any noise emissions and can fly very low over populated areas.